Word landscape is used primarily in two meanings. On the one hand, it refers to the culturally influenced, subjective perception of an area as aesthetic wholeness, on the other hand, especially in geography, it is used to designate an area that distinguishes itself from other areas by means of scientifically detectable characteristics (geographical landscape concept).

The exploration of space focused strongly on a locus amoenus, ie on a place where certain objects, such as a tree or several trees, a meadow, a spring or a stream, in relational arrangement to each other, they are the Give viewers a sense of well-being and the freshness of existence.

As the saying goes: "Let the flowers speak!" And there are more than enough ways to give them away. But apart from the red rose, which is a well-known symbol of true love, very few people know that almost all flowers have a meaning. This symbolism is often caused by their appearance and their effect, but the color is also decisive. We will tell you which flowers we prefer to give away and what their significance is. You can also find out from us which symbols are behind which colors.

A sailboat is primarily powered by wind power. The propulsion is provided by a sailboat through a combination of wind pressure on the sails, the air flow around the sails and the opposing resistance of the lateral plan in the water. For regatta sailing boats are divided into boat classes, which regulate the structural characteristics of a boat type more or less strongly. The term "sailing characteristics" refers to characteristics such as the achievable speed at a given wind speed, the heeling occurring or the maximum height at the wind. 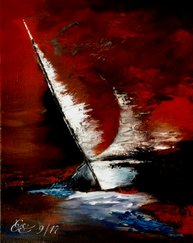 My canvas is the world